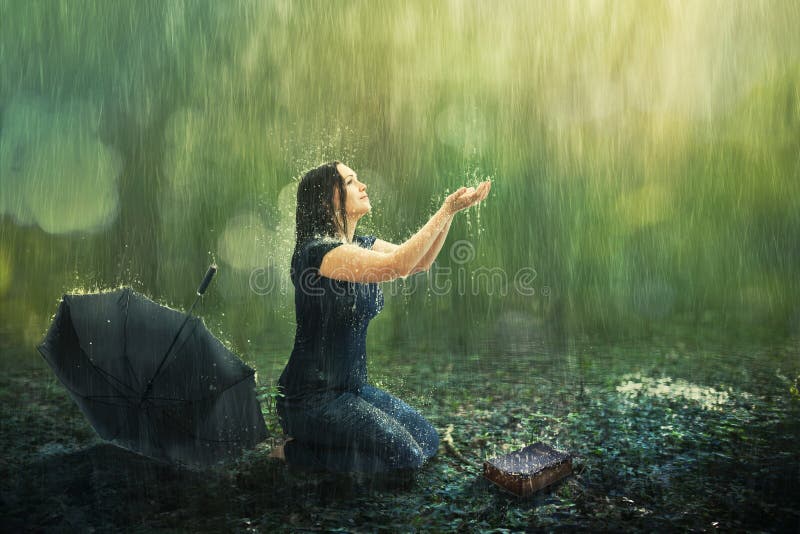 The current theory on how rain forms is that water evaporates from the surface of the Earth, becomes a gas that rises in the atmosphere, and due to cold temperatures and nuclei condenses in rain drops that then fall to the Earth.

The problem with this theory is that according to the evidence it can’t happen that way.

The amount of water that the air can hold depends on the temperature of the air. The air does not become super saturated with water so when the water in the air reaches the saturation point it condenses and drops out of the air. 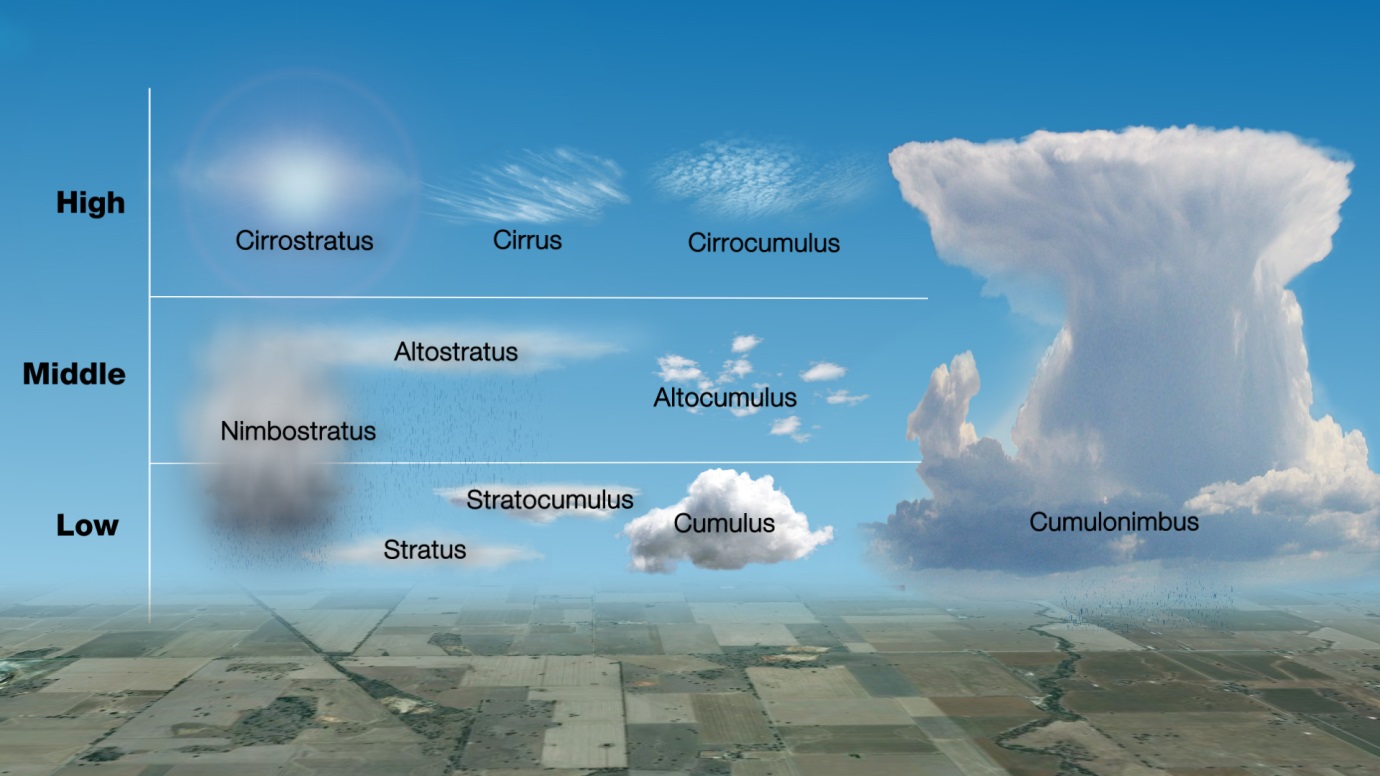 At the troposphere-stratosphere boundary, if the temperature is -50 C why are the droplets forming as liquid water instead of ice? The current theory asserts that clouds are composed of super cooled water but super cooling is not that simple. Water must be pure and undisturbed. The nuclei thought to cause the water to condense would also initiate the formation of ice crystals and the turbulence of rain clouds would cause super cooled water to instantly freeze solid. 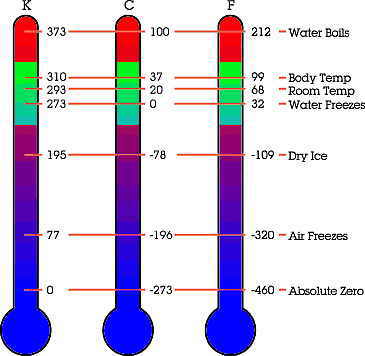 When dealing with energy the usual practice is to use the Kelvin scale (see above) where there are no negative values and 0 K represents where an object has no kinetic energy. The problem with the Kelvin scale is that uses the same inaccurate thermometer that the centigrade scale uses.

Even the size of a calorie (the energy needed to raise the temperature of 1 gram of water 1 degree C) changes depending on the initial temperature of the water. It makes no sense to calibrate an instrument to measure kinetic energy when it misses so much energy and its accuracy varies. 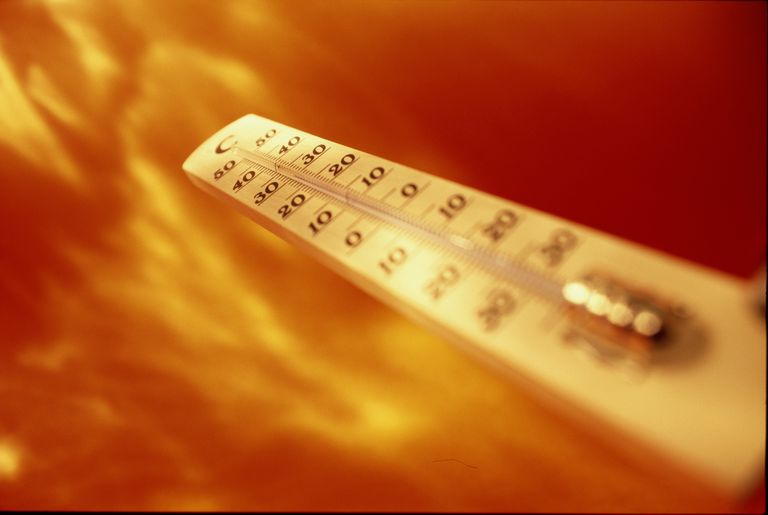 A new scale is needed for dealing with energy and it should be based on the amount of energy added to a system. The units for this new scale are Kal which is a combination of the Kelvin scale and calories (A calorie is1/100 the energy needed to raise 0 C water to 100 C water). 173 Kal is the temperature of 0 C ice. 253 Kal (173 Kal + 80 calories) is the temperature of 0 C water.

353 Kal would be the temperature of 100 C water while 893 Kal (353 Kal + 540 calories) would be the boiling point of water. This scale is better able to represent the energy contained in a system.

How would we determine the energy of a system if a thermometer cannot be used? For the atmosphere the universal gas law (PV=nrt) will give the kinetic energy of the molecules at different altitudes. In an unconfined gas, like the atmosphere, the pressure (gravity) can be considered as a constant and any change in kinetic energy will result in a change of volume. 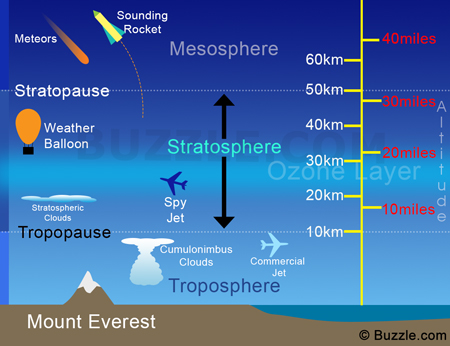 When this is done it shows that the energy of molecules increases with altitude (density decreases). The energy increases at a steady rate in the troposphere, then rises exponential in the higher atmosphere levels. The reason for this is that water is a liquid in the troposphere and converts to a gas in the stratosphere.

Why would energy increase with altitude if the surface of the Earth is heating the atmosphere by converting visible light to infrared radiation?

Oxygen and nitrogen absorb most of the high energy ultraviolet light coming from the sun. In the upper atmosphere this energy splits the molecules (940 kjoules/mole for N2 and 490 kjoules/ mole for oxygen) and converts it to kinetic energy of the atoms and molecules creating the ionosphere.

What evidence is there to back this claim up?

The visible light and infrared spectrums are emitted from the sun’s surface while uv and x-rays are emitted from solar flares. When sun spots disappear during their normal cycle the change in the visible spectrum is only .1% but the change in the Earth’s climate is dramatic. This shows that it is the uv light that is transferring most of the energy to heat the Earth, not visible light. 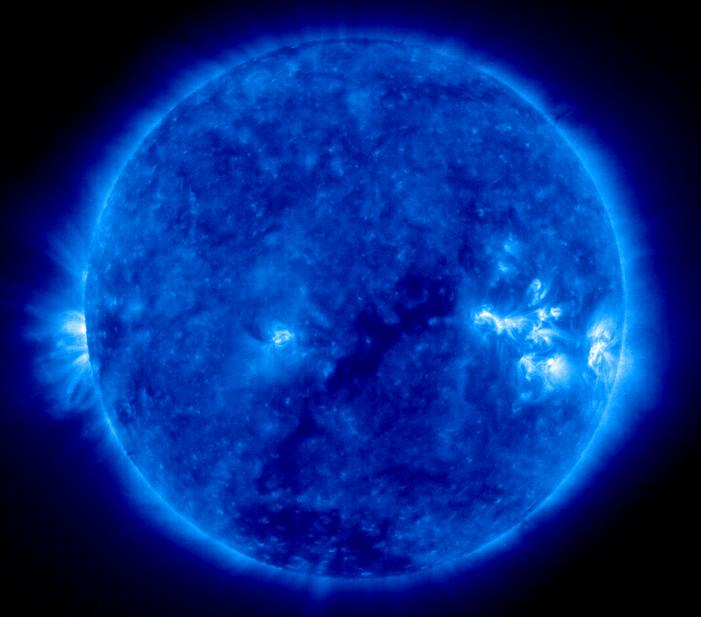 If the kinetic energy increases with altitude how does rain form and why does it occur at the troposphere-stratosphere interface?

To understand this, the strange properties of water must be understood. James McGinn has pointed out that water cannot exist as a gas below its boiling point (893 Kal). Since liquid water molecules exist close together (little compressibility) and are constantly colliding with neighboring molecules it is not possible for a water molecule to have that large of a difference in kinetic energy from its neighbors and convert to a gas until all the water molecules have gained most of the energy needed to become steam.

James’ proposal that water evaporates as nano-droplets of liquid water makes sense and explains why the troposphere can absorb so much energy from the sun (unlike gases). To understand how water evaporates it is necessary to examine the experiments of Dr. Gerald Pollack. 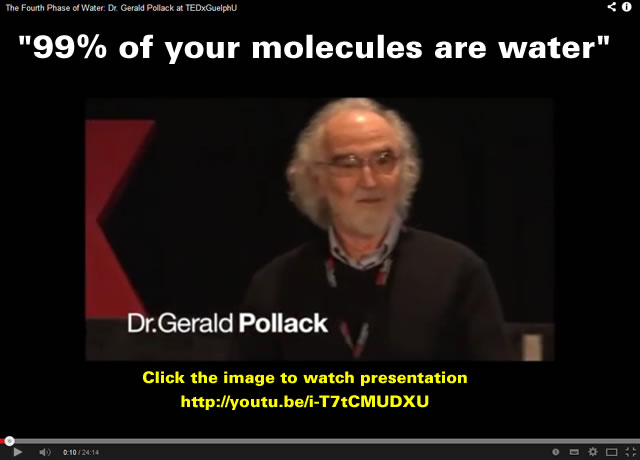 When water is contained in a hydrophilic or polar container, the structure of the water next to this surface changes.  Dr. Pollack identifies this as a fourth phase of water and calls it the E Z zone. The water in this zone will expel colloidal particles and even salt ions making a clear layer of fresh water in a container of salt water.

When electrodes are inserted into the E Z zone and the main body of water a current flows indicating this structure is a result of ions. The negative charge of the E Z zone is a result of hydroxyl ions combining with water molecules to form structures with liquid water and positive hydrogen ion in the body of the water.

When radiated energy (particularly IR) is applied to the container the E Z zone increases in size which indicates that more water molecules disassociate into hydroxyl and hydrogen ions forming a stronger crystal structure.

Dr. Pollack has stated that a more appropriate name for this water phase is a liquid crystal where an object has properties of both a liquid and crystal.

When water evaporates or sublimates the energy coming from the sun creates a droplet with a negative crystal surface and a positively charged center. It is the repelling force between the crystal shell and the surface of the Earth that causes the water droplet to rise in the atmosphere. As it rises it absorbs more energy from the sun acquiring an even stronger crystal shell with a greater negative charge.

A liquid crystal has two melting points. For water the first is at 173 Kal while the second is between 353 Kal and the boiling point (893 Kal). The crystal melts before the water boils and when it melts the electric and kinetic energy contained in the droplet is released causing the turbulence and electrical activity in the clouds.

This mechanism explains why water, with its low molecular weight, is confined to the troposphere and does not evaporate into space. Water is absorbing energy in the troposphere, moderating the air temperature, and then conveying that energy to the stratosphere where it is released and can be radiated into space.