At the very start, Dr Ball speaks of the disturbing trend in society for people in positions of power to rush to law to silence critics. Clearly, despite relishing defeating Dr Mann, Ball would much prefer scientific disagreements be kept out of the courtroom.

“These are called SLAPP lawsuits, that’s an acronym for Strategic Lawsuits Against Public Participation. Why have I received lawsuits? Why not all the other skeptics out there who have challenged what is being said – why have they focused on me?”

Dr Ball jokes that he would like to think that the lawsuits are because he’s the most brilliant guy in the world, but anyone who knows him, knows that it isn’t that. It is, in fact, because Dr Ball is a bona fide climatologist; a scientist who hold a PhD in the study of historical climate change.

Dr Ball points out that the irony is this requirement only goes one way; no one criticizes Al Gore (or Greta Thunberg, etc) for not being qualified (they aren’t in the slightest!). The hypocrisy reveals the deep political bias that Ball says has pervaded the climate debate for 30 years.

“I have the knowledge of the history to argue these alarmist claims were all nonsense. So, I ended up with three lawsuits, all from the same lawyer (Roger McConchie), all from members of the UN IPCC. The first lawsuit, my wife and I agreed we couldn’t afford to fight it so we withdrew what I wrote. That turned out to be a good thing, ironically, because a few months later we got a second lawsuit from Andrew Weaver. My wife and I said we are not going to be legally bullied; we’re going to fight this.”

“Weaver was a professor of climatology at the University of Victoria but didn’t have any training in climatology. I knew from the first time I interviewed him he knew nothing. But this is the problem; they create a ‘climate model’ and suddenly they are a climate expert.”

Andrew Weaver, despite knowing nothing about climate, was appointed the lead modeler for the UN IPCC. After that he left his university post and became the leader of the Green Party in British Columbia. He now sits in the British Columbia legislature with his political bias now disclosed by his activities.

“The lawsuit that he brought against me – I won that one – the courts threw that one out. So that was the first victory. “

The second lawsuit that came shortly after the Weaver one, was brought by the ‘world’s leading climate scientist’ Michael E Mann of Penn State University.

“Mann had produced this model of the historical climate record that was, in fact, complete fake news. He completely re-wrote the climate history. I knew immediately when I saw it what was wrong with it, so, of course, started open attacks on it. Shortly afterwards I got served the lawsuit. It was a defamation lawsuit, as they all are, which tells you all about this being an attack on free speech. I have given a presentation of what Mann had done and how he had done it – how completely false it was. For example, he used one tree record for a thousand years and then adds onto that the instrumental record to create the ‘hockey stick’ shape graph. It is completely scientifically illegal to attach data from one source to another source. Yet that is what he did.”

A smiling Tim Ball then says, he naturally linked the fact Mann was at Penn State and flippantly used word play to create his now famous quip that Mann ‘belongs in the state pen, not Penn State.’

“I thought that was pretty good!” laughs Dr Ball. “But within hours I had a lawsuit from him. That lawsuit was scheduled to go to trial on February 20th 2017 but Mann, himself, backed out on that. Yet he now accuses me of delaying the thing. He just weaselled out – backed right out on it.”

Dr Ball explains that Mann was given almost nine years to prepare for the case.

“I’m ready to go any time he wants!” exclaims a defiant Dr Ball.

Ball laments that cowardly Mann is:

“now going on the internet saying I’m the one who’s caused the delay. But I will meet him any time and any place he wants! Name it and I’ll be there” scoffs Ball. Indeed, Mann and his shyster lawyer never stop lying and misrepresenting the facts.

“But he’s got a PR campaign going on there now saying that I’m the weasel and the one who won’t face up to the realities, so I’ve just sent an email to my lawyer where we are preparing a response to this to go on the internet explaining what the actual truth is. “

Despite his humiliating defeat and bogus assertion he would appeal the decision (he can’t – the deadline has expired), Mann is still threatening lawsuits and making ridiculous climate claims.

On the Issue of Legal Costs

The judge in the Mann-v-Ball case ruled that the defeated Mann must pay Ball’s legal costs, which are in excess of US$700.000. But Mann has already indicated he won’t pay. Dr Ball explains that he and his wife expended all their savings in fighting the case:

“ We don’t regret that, we knew what we were doing and I’m so grateful for my family’s support. But then after, John O’Sullivan [Principia Scientific International] over in England, who has been battling this too, he helped me set up a website and I got a lot of donations from people to help with the legal costs.” 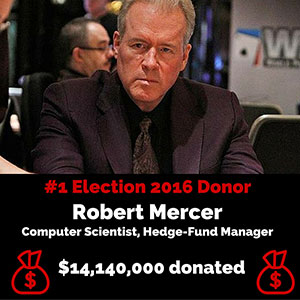 “He (Mercer) just said ‘Look, I’ll provide all the legal funds you want.’ So, Mercer arranged everything through my lawyer. Mercer’s only comment to me was ‘Michael Mann is a charlatan and he needs to be exposed.’”

Ball goads Michael Mann for his cowardly avoidance of open debate – the proper arena to determine the merits of scientific disputes.

The rest of the interview reveals interesting background information on the myth of the ’97 percent’ consensus on climate change, exposing how the UN was corrupted by Maurice Strong to pursue socialist ideology via Agenda 21.

Dr Ball gives a huge boost to skeptics by hinting of his plans to continue the battle to expose the corruption of climate science. In that venture he is being ably backed by a consortium of like-minded skeptics and advocates who want to see more open science and true accountability in a sea change in the way government research is managed.