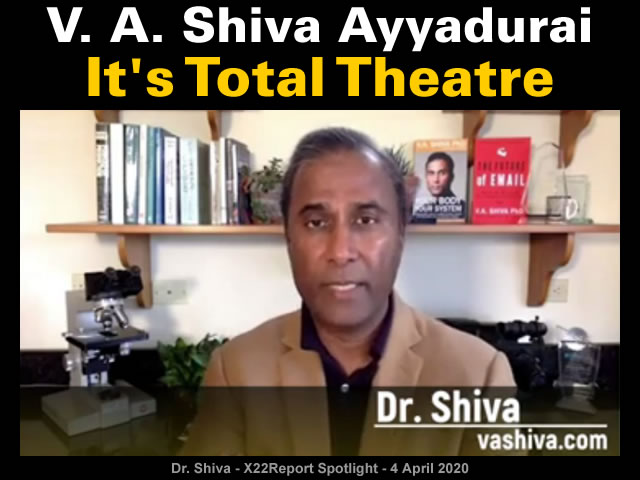 Dr. Shiva Ayyadurai is the inventor of email, an MIT PhD and specialist in systems science. He has a unique take on the COVID19 pandemic that is being taken seriously.

Dr Shiva provides a unique scientific insight into how we got ourselves tricked into believing COVID-19 presents a major global health crisis. Despite his extraordinarily successful career as a scientist Shiva is an anti-establishment figure not fully accorded with all the accolades some say his talents merit.

Asked to explain what he believes is really going on with regards the COVID19 pandemic Dr Shiva explains that is where philosophy matters to actually perceive a situation:

“There are two ways we can look at this. One is we look at the immediate issue and we try to take what is called the reductionist approach and the other approach is you try to understand the whole matter, which is called a systems approach.”

He then uses the parable of the six blind men, each of whom is asked to touch a part of an elephant and try to describe with it is. Obviously, each one describes only the small part of the elephant they touch e.g tail, trunk, legs and by so doing over a false overall picture very unlike an elephant.

Shiva hates corruption and wants societal change from the bottom up – he speaks like a libertarian and his sensibilities make him a natural ally of Donald Trump’s vision to ‘drain the swamp.’ While Trump exposes and attacks the rot in government, Shiva goes for the jugular of Big Pharma.

In this 54-minute video interview Shiva adroitly exposes the lie that intervention medicine, including vaccines, are the cure all for modern diseases.

Dr Shiva compellingly exposes the groupthink and complicity between the CDC, Big Pharma and China’s rising hegemony in manufacturing, commerce and science. His is a compelling thesis but chilling.

“This coronavirus outbreak is a wonderful way to chill dissent. Very quickly it served to stop the public protests in Wuhan and Hong Kong against the Chinese government.”

He says the current coronavirus pandemic was a planned event and the lock down of 80 percent of the world’s population serves a three-pronged deep state purpose to get rid of Trump by crushing the economy, bring about forced vaccinations and chill dissent/grow government power.

“I argue that those in power never want us to see the elephant, they want us to see this blinded view of reality. That’s the reductionist approach. This is what happens when those in power want to use ‘science’ to hide the larger picture. The ‘elephant’ here is the immune system. What is the immune system, and is it so frail that a virus can destroy it? If you look at the way the media and medical establishment handle it (I don’t blame doctors or frontline medical workers) but medical education is based on a Big Pharma medical education model which doesn’t help doctors really understand the immune system. “

Shirva then characterizes how a typical medical doctor will explain the scenario of how a virus will invade and destroy your body and a vaccine will block that destruction.

But peeling the narrative back like layers of an onion, Shiva puts this all on to a more solid scientific foundation and how we must understand that the immune system is extremely complex – made of multiple subsystems including the innate immune system, the interferon system, the adaptive, microbiotic, the biome – all our gut bacteria – the viron (our bodies normally have sixty trillion viruses) plus the gut/brain interactive system.”

Dr Shiva is not spouting a crackpot theory. His explanations are backed by many highly-credentialed fellow scientists who affirm that viruses are endemic. As Jim Robbins (New York Times, ‘Trillions Upon Trillions of Viruses Fall From the Sky Each Day’ ) reports,

“Some 800 million viruses cascade onto every square meter of the planet. Which forms the “virosphere,” the world of viruses on the planet. Viruses modulate the function and evolution of all living things. But to what extent remains a mystery.

“When the Vaccine Act was passed by JFK back in 1962 (which precipitated the birth of the CDC) little was known about any of this. But people still believe the false paradigm that a virus comes into our bodies and then attacks our immune system by attacking our cells.

But here is the reality: in our normal condition, because we grew up and survived among microbes, bacteria and viruses, is that a pathogen ‘comes in’ your body recognises it with what is called the innate system ( your eyes, mucus membrane system, a whole set of ‘infantry’) and that tries to knock it out there and if it can’t do it there over the next 72 hours the body uses the adaptive immune system to create antibodies. In the normal sequence of events, the body fights back and matters resolve themselves. It is called ‘resilience.’”

However, if people’s immune systems aren’t running on ‘all six cylinders’  and a couple may be knocked out due to bad eating (high sugar diets which create candida and gliotoxins ) the body may have only ‘two cylinders’ left to fend off infection.

These remaining ‘two cylinders’  can then over react as part of a dysfunctional and compromised immune system which will not jut attack the invading virus particle but also the dead and shedding parts of the virus as well. In the case of the coronavirus the attacks hit the epithelial tissue of the lungs.

It may be genetic, epigenetic, exposure to excess environmental pollution and also because you’ve been eating garbage most of the your life, or as you age.

“When you age your thyroid function goes down, meaning the body produces less vitamin A, which is so important because it helps ‘walls’ around your cells to prevent any pathogens from getting in.”

Then there is Vitamin D

“This is an amazing nutrient which we got mostly from the sun. If not, then from fatty fish. Vitamin D is used by the body to ward off pathogens. Without these essential nutrients the body becomes immuno-suppressed.”

“Unfortunately, everyone around President Trump is talking ‘vaccines, vaccines, vaccines’ forgetting that most of us are fine – we get viruses all the time, build antibodies and move forward.

We all have 380 trillion viruses right now in our bodies.  The coronavirus is a flu virus, a variation of the SARS virus but with a higher infectivity rate and a lower mortality rate. But it is a virus and our bodies know how to deal with it.

However, with people who have compromised immune systems (such as older people and the kinds mentioned above), such as those in Italy where the median age is around 80 years old, they are the ones that viruses go after.  The issues is, why are we shutting down entire countries?”

The mainstream media stokes the fear among viewers, readers and listeners but on the ground the hard reality is that things are not as bad as being portrayed.

We are seeing citizen journalists, for example, in New York going to hospitals and making videos showing them either near empty or appearing otherwise normal.  So, why are the msm pushing this as the worst crisis ever seen?

Dr Shiva sums it up as follows:

“All the fear-mongering is to serve three purposes.