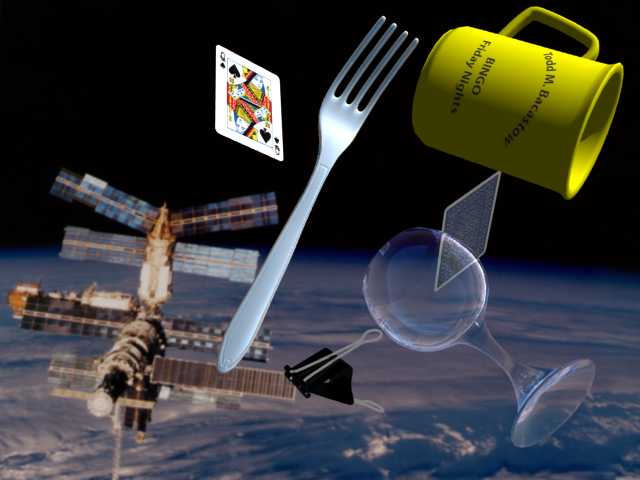 It’s nothing new. Landfill sites are filling up, faster than ever, with all kinds of debris. Just about everywhere. How did it come to that? Blame the “Greens” and the “Authorities.”

The answer lies in the decomposition times for various items in your garbage-to-be-deposed-of. As they vary from a few years to millions of years, known as eons, the landfill sites keep filling up.

But don’t despair – yet

There is another garbage site that finds rapid acceptance by various agencies around the world. And it has nearly unlimited capacity, at least on paper. That new “landfill site” is called SPACE, i.e., the next to unlimited space surrounding the earth. Isn’t it a big void, ready to be filled up – as some may think?

That stratosphere (“Space”) starts near the poles at a mere 5 miles (8 km) but near the equator more at double that height above the oceans, where the earth’s atmosphere is next to non-existent. The air pressure in the lower stratosphere (approximately 20 km height) is only 10% of that at sea level. That’s not enough to sustain your breathing and life. Furthermore, the temperature is somewhere between -40 and -80 degrees Celsius (40 to 100 degrees Fahrenheit BELOW zero).

As it appears though, all that unfilled “Space” is no longer quite as unlimited as some folks may think. For example, wayward screwdrivers and similar implements lost by astronauts on outside missions at the International Space Station (ISS) have put supply rockets as well as the structure and astronauts at potential peril for years already.

But now comes a new menace, fragments of a satellite “successfully” blown to 400+ bits by a rocket from the military in India. Exactly how many fragments, their sizes and trajectories are not yet known, probably never will be. Any of those pieces hitting the ISS with a velocity that may puncture it can be fatal to its occupants.

If one of those pieces of space-junk is on a path that makes it come back down to earth, it’s nearly certain to burn up in the atmosphere with no concern to anyone at the surface.

However, if you are in the ISS, even a small hole in its structure can result in a rapid loss of internal pressure and potentially cause the whole abode to become uninhabitable soon thereafter.

Of course, assorted pieces of other man-made satellites and their broken parts are relatively slow moving in comparison to other, high-velocity pieces of “micro-junk” that are beyond advance-recognition and tracking technologies.

That (latter) type of “space-junk” usually travels at a much faster speed, like comets and asteroids that typically travel at speeds of many thousands of miles per hour!

Clearly, much of that outer space is next to empty but that’s no reason to think of it as another garbage dump, just there to be filled up with whatever disposable items from earth. Western societies’ (very costly) attempts to “RRR” (Reduce, Reuse, and Recycle) are mostly a “feel-good” idea without any benefit and often to their detriment.

I have no problem with any of the “RRR” terms per se, but only within the framework of proper cost/benefit analyses. Willy-nilly application of any of those “R’s” without an understanding of their true effects, their costs (both here and elsewhere), or (known) better alternatives, makes the problems only get worse, not better.

The (environmental) problems we now have in parts of the world are mostly because of inadequate treatment of “garbage.”  The “RRR idea” is, unfortunately, contributing to the problems, for a simple reason.

Typical household  garbage is no longer (and hasn’t been for decades now) a “clean” assemblage of materials that can be easily composted to produce fertile soil, or even be reused/recycled to produce newer or better materials for any purpose.

Not only do we not have the capability to convert all kinds of plastics, like food containers, magazine mailing envelopes, and numerous other plastics into new products, even if we could, it still would be a waste of energy. From collection, to storage, to sorting, to cleaning, to actually “recycling,” each step consumes energy, labor, space, clean water and — in the end – is a no-win situation all around.

Not long ago, our local “recycling” system recognized it, in a small part only, by no longer accepting Styrofoam for recycling. It is now to be disposed in regular garbage.

Garbage should be Destroyed, not “Recycled”

I find it truly amazing how folks who proclaim to be highly concerned about such things as “pollution,” “climate change,” and related concerns can be so naïve to expect that “out-of-sight” is the same as “problem solved.”

Garbage should be destroyed for good, for several good reasons. Nearly all of it cannot actually be recycled and turned into other products. The most obvious reason is that most materials are not clean enough to do so and, even if they were, it still would be an energy-wasteful exercise in futility.

So, what’s the solution out of this apparent dilemma?

That additional “R” stands for “Recapture” of the energy content. Any modern garbage incineration plant with catalytic “afterburners” can do that. Thousands of tons of municipal refuse can thus be reduced to a few cubic feet of solid material, some of which can truly be recycled (e.g. metal components) and the current landfill sites will last for centuries.