Russia May Catch the North Pole 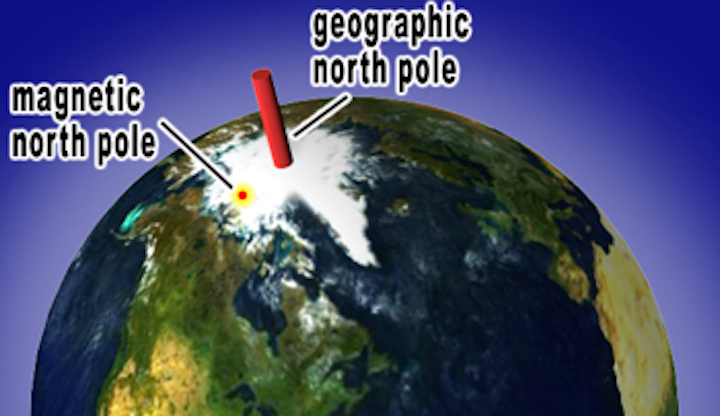 As Newsmax reported, the magnetic North Pole is wandering towards Siberia at an increasing speed, currently in the order of 35 miles per annum.

Just when you had been thinking of following your compass until you see some polar bears in northern Canada, the magnetic North Pole shifted again. And if the pundits are right, it may just take a few more decades to point you right towards Siberia. Clearly, that’s intolerable.

What is NORAD going to do about that?

Well, they are standing by and adjusting their bearings more frequently.

Really, there is no other choice.

The Magnetic North Pole (MNP), of course, has nothing in common with the Geographical North Pole (GNP).While the GNP is a fixed point on the globe, the MNP is not and it has been moving about forever.

Once in a while, the MNP even flips upside down. In fact, over earth’s history, there were numerous events of the MNP “suddenly” changing its location from the northern hemisphere by 180 degrees to near the geographical SOUTH Pole, and back again.

Such magnetic reversals can be observed from undisturbed solid layers of basalts and magmatic rocks that contain magnetic minerals (such as magnetite and ilmenite) in various rocks of the world, such as the mid-ocean ridges.

According to current knowledge, the last of such magnetic pole flips occurred less than 40,000 years ago and reversed fully again after only some 400 years of “aberration.”  Robert W. Felix has written about such magnetic reversals in his book Magnetic Reversals and Evolutionary Leaps.

Magnetic reversals of the past were typically accompanied by severe disturbances of the earth’s climate regime. At least some of such were likely due to cosmic events, like large meteor impacts or other infrequent perturbations.

No such major impact or other cause has recently been observed but the MNP is wandering off straight towards Siberia at an increasing speed. Just a quarter century ago it was still found within the Canadian Arctic Archipelago. Since then, it moved by more than 1,000 km in a northerly direction and currently is found to be close to the GNP.

You might think of the MNP as the pink bunny in a well-known battery commercial that you may have seen on TV; it keeps going and going  – indeed, faster than ever recorded before, see the figure nearby.

Figure: Movement of the North Magnetic Pole since 1590; dotted line is the movement since 1994; source: Wikipedia.

The earth’s magnetic fields have found important applications for orientation and navigation. That has been recognized during the Han dynasty in ancient China, about 2,000 years ago. The instrument invented then for its practical use is known as magnetic compass (MC). The magnetic compass became widely known and adopted in western cultures around 1300 AD. Both the MC and MNP were vital to ocean going vessels for many centuries.

Actually, the MC is still a standard piece of equipment on most ships and probably also in most air planes, even though modern satellite driven GPS (global positioning system) devices provide much higher accuracy and speed of position acquisition than was possible with the magnetic compass. However, when the GPS fails, for example during periods of intense rain or snow fall, or power failure, having even a small handheld magnetic compass can still be a life saving device.

Needless to say, for that to give you the right direction it is also vital to know where exactly the magnetic pole is that the compass needle points to. That’s why the MNP’s newly discovered “wanderlust” requires more frequent chart and instrument adjustments to keep up with its changing variation from  True North (i.e., the GNP), especially if your position is more or less perpendicular to the MNP’s path.

So, if you plan to go on travels into the distant “unknown,” don’t leave home without a magnetic compass.