Mid-Winter Musings from the Underground in Punxsutawney, PA, USA 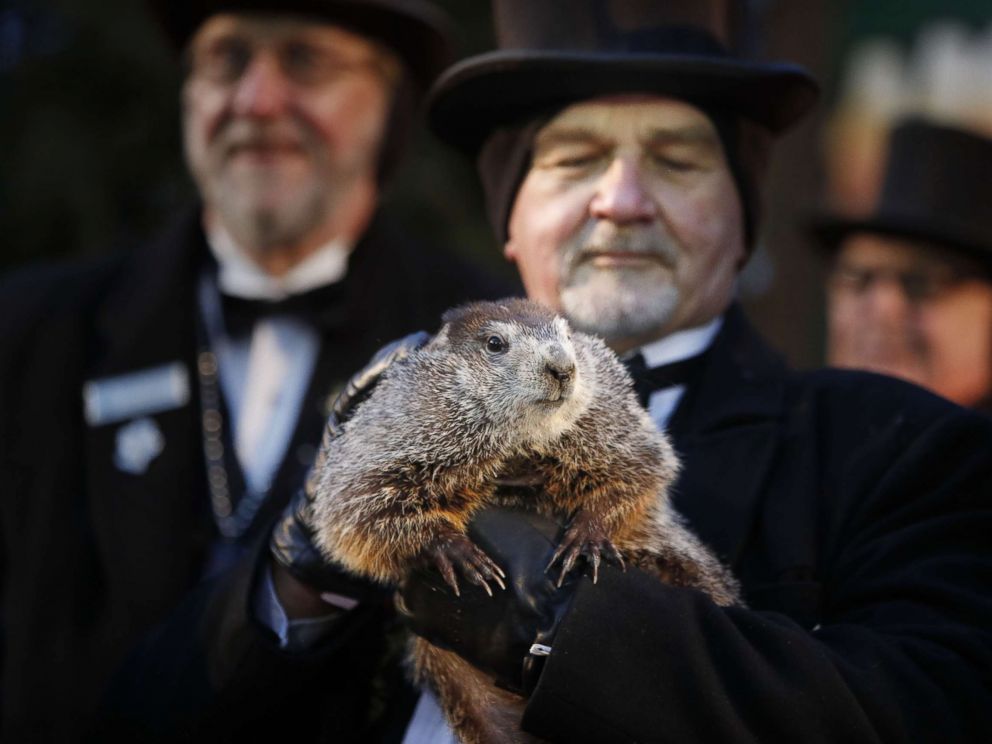 My Dear Cousins Wiarton Willie (in Ontario) and Shubenacadie Sam (in Nova Scotia) in the Great White North of CANADA,

Phyllis, I, and our entire offspring were really happy to get your greetings last year. What was a real surprise and most pleasant news to read was that our “long-lost” cousin Shubenacadie Sam is fine as well!  We hope to keep in regular contact now. Luckily now, mid-winter is here again.

Having laid in plenty of supplies all fall long, we are happy to note that everything looks fine, here in Punxsutawny country, at least in the warm underground. Of course, we do not venture much outside these days, except when absolutely necessary. As you know, it’s cold out there and in some areas the snow is so deep in Newfoundland and Labrador that the government even called in the army, with their 50 or so snow shovels, to help clear the roads. – The poor Newfies.

Well, what’s new with us?

Luckily, our food cache (including reddish liquids) should last well into spring and we have plenty heat energy as we are using natural gas as much as possible. Of course, many folks have not yet easy access to this abundant and inexpensive form of energy. They have to rely on other energy sources like electricity. As if that were not expensive enough, just for cooking and lighting the abode, now, some of them NGO-know-it-all even want to make that more expensive. Actually, a lot more expensive.

Unfortunately, some similarly deranged politicos are on the same “save-the climate” bandwagon. Let me tell you, dear Cousins, it’s a horror story. How can one even think of “protecting” a 30-year (climate) average? It defies all their previous hallucinations.

Let’s go on to happier news.

Believe it or not, we’re gonna have a new first for the entire clan: Amy (our younger daughter-in-law) is expecting twins this year!  The news was a complete surprise for us, we could hardly believe it. As far as Phyllis and I know, there have never been twins in this side of the clan before. How about in your branch of the family?

Whatever, we are exalted! Phyllis wants to send a suitable present. I was thinking of a nice portrait of the two of us but she nixed that. Perhaps a clan history would be more suitable, she thinks. Still working on that project, so let me go on to other news.

The annual PowWow in Davos

Surely you’ll have heard of that in the past. The script never changes, just some of the characters: The elite is getting together there in hundreds of private jets for a few days of fun, skiing downhill on groomed Alpine trails and for some Après-fun and five-star-dinners. While they are having a great time they are telling the rest of the world to curtail their energy-use, to eat more veggies, and other silly admonitions.

Needless to mention, they themselves, never feel bound to practice what they preach. The idea of “living by example” has probably never occurred to any of them. That “privilege” is reserved for us in the underground.

But let me go on to another subject that’s always dear to my heart, namely science in general and all the new discoveries and technological advances.

As you may also know, hardly a day goes by without someone, somewhere discovering a most astounding revelation. In my humble mind, many if not most of such claims are self-aggrandizing (mis)-constructs, based on inadequate experimental setups, false analysis, lack of reproducibility and so forth.

It’s hard to believe but nevertheless a true fact that even highly-renowned scientific journals are falling prey to papers that hope to “set the world on fire” with absurd claims. The so-called peer review process is still prone to undue manipulation. How can this problem be overcome? For example, when it comes to the proclaimed carbon dioxide (CO2) correlation with the global mean temperature, it ought to be obvious that there is no such cause-effect correlation.

If anything, CO2 is a Cooling Agent

I always like to look at the temperatures at the equatorial Elysium Plain on planet Mars. There, even on a “good day”, it‘s cold (5 °F, or -16 °C) during the day and mind-boggling cold at night, like -140 °F ( or -95 °C). That’s with 960,000 ppm of carbon dioxide in the air on Mars versus a mere 400+ ppm on Earth.  What else could be a logical conclusion for those temperatures than that this gas is a coolant.

Can you even imagine how cold that -140 °F is? The little carbon dioxide we exhale would instantly freeze into “dry ice.” Still, some of the bipeds think that’s where they ought to be going. I wish them luck, if they ever get there at all. Those poor souls are even more deluded than many of our contemporaries.

Besides, in terms of probability of any asteroid impact, as Mars is closer to the Asteroid Belt, its inhabitants would even be more under the threat of such there than us here on Earth. So, I simply cannot see any reason for folks wanting to move there.

With that, dear Cousins, I’d like to conclude this year’s musings.

Let’s keep the groundhog family growing!  Watch out for the birds of prey in the sky and the bears, coyotes and other no-good neighbors on the ground!

With our best wishes for a good year ahead, keep warm and healthy!

Yours, Phil and Phyllis in Punxsutawney