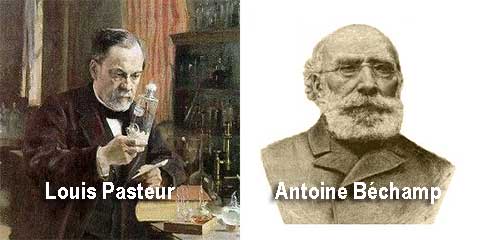 The coronavirus pandemic is a tragedy on many levels. Scientifically, at minimum, it exposes the low reliability of computer models.  Something is amiss and critics say we may be due a wholesale re-examination of the consensus science of Germ Theory.

For over 100 years medical science has followed Louis Pasteur’s Germ Theory. Essentially, Pasteur argued that diseases are caused by specific microorganisms which invade our bodies from the outside.

But Pasteur’s rival – a friend and contemporary – Antoine Béchamp proposed an alternative. Instead, Béchamp argued that illness stems from an unhealthy immune system which triggers changes in minute particles of the body that can lead to disease.

Béchamp’s theory was simple, cost-effective and focused on the preventative – pursuing good nutrition, eating a varied and healthy diet, avoiding pollution and being fit and active. It wasn’t a money-spinner.

Instead, pharmaceutical manufacturers saw huge potential in Pasteur’s ideas which presented real money-making opportunities in both preventative and curative medicine by way of developing, marketing and selling expensive drug therapies and vaccinations programs.

Vaccines are very big business: this Feb. 23 CNBC article, for example, describes the vaccine market as six times bigger than it was 20 years ago, at more than $35 billion annually today, and providing a $44 return for every $1 invested in the world’s 94 lowest-income countries.

As a result, for the last century, western medicine has made us dependent on drugs to treat symptoms, effectively minimizing the importance of nutritious food, fresh air, hygiene and sanitation.

But vaccine safety and effectiveness is increasingly problematic and the current COVID19 pandemic may prove a turning point in medical thinking.

The COVID19 pandemic is revealing we are not all equals when it comes to disease infection. We are seeing that healthy immune systems are not succumbing to the disease. It appears the better nourished, fit and healthy you are, the lower your risk of a life-threatening infection.

The table below identifies the key difference between Pasteur’s theory and Béchamp’s:

In dealing with the coronavirus we are seeing that diet modification, by way of taking vitamin supplements – even ingesting a small amount of Hydroxychloroquine (related to Quinine which was was first isolated in 1820 from the bark of a cinchona tree) are working well in fighting the coronavirus.

This evidence may be a boon for the Béchamp’s Host (Cellular) Theory, otherwise called Microzymian Theory.

In her article ‘Pasteur vs Béchamp: The Germ Theory Debate’ (February 06, 2018) Kate Raines offers an excellent examination of both competing theories and should be read widely to better inform as to why our governments may need to review public health policies.

“Louis Pasteur was a French chemist-turned-microbiologist, who proved the existence of microbes in air. His pioneering studies laid the foundation for the modern-day understanding of diseases, their etiology as well as vaccine development.”1

How that quotation is interpreted—whether as high praise or condemnation—depends on the perspective. Pasteur was not the only scientist who delved into the origins of disease. While he focused on the influence of invading microbes, or what has come to be known as the “germ theory,” his rival Antoine Béchamp, one of the period’s preeminent scientists, was promoting a different theory. Béchamp’s theory, referred to as the “microzymian” theory of disease, has since become known as the “cellular,”2 or “host”3 theory.4

By all accounts, Béchamp was a highly respected scientist whose teachings were accepted as fact by many of Pasteur’s contemporaries.5 So how is it that relatively few people today have even heard the name of Antoine Béchamp and that it is Louis Pasteur’s scientific conclusions that form much of the basis of contemporary medical thinking about infectious disease?

The germ theory of disease holds that “specific microscopic organisms are the cause of specific diseases,” a statement that is so pervasive today that it seems self-evident. Historically, however, variations of the germ theory had been around for hundreds of years but had never taken hold. It was not until Pasteur’s work became publicized in the 19th century that it gained widespread acceptance. Reducing the idea of disease to a simple interaction between specific microorganisms and a host, the germ theory minimized the role of environmental factors on illness, conveniently dismissing social responsibility for disease, especially among the poor.

The work of Pasteur and his associates led directly to the acceptance of vaccines by “leading medical scientists—those longing for a sound and simple explanation for the inexplicable.”6

Béchamp’s view was that disease-causing germs were essentially altered microzymas… a term he gave to minute particles he considered to be the common stuff of all living things capable of adapting to changing conditions in the body.7 Quoted as saying, “The microzyma is at the beginning and end of all organization. It is the fundamental anatomical element whereby the cellules, the tissues, the organs, the whole of an organism are constituted,”8 Béchamp maintained that disease developed in the presence of an unhealthy environment caused by an unbalanced state in the body. He held that disease could not take hold without a preexisting weakness.9

As summarized and greatly simplified by author Walene James10—and ridiculed by Mark Crislip11 in Science-Based Medicine—Béchamp’s basic message was that:

Among those who rejected germ theory, instead championing the influence of diet, climate, ventilation, hygiene and sanitation in causing disease were Florence Nightingale and Rudolf Virchow.

Rudolf Virchow, an early opponent of the germ theory of disease, believed that germs do not cause disease but instead gravitate to the diseased area as scavengers, to feed on and clean up the dead tissue caused by the pathogenic process. Virchow stated in his later years, “If I could live my life over again, I would devote it to proving that germs seek their natural habitat—diseased tissues—rather than causing disease.”12

Western medicine fiercely protects the germ theory of disease, scorning and dismissing Béchamp’s ideas out of hand. There is no doubt that much of what Béchamp was able to determine has been supplanted now by scientific resources unavailable to him at his time, but that can also be said of Pasteur’s theories. Such a narrow view of disease misses the gist of Béchamp’s teachings: the importance of supporting a strong internal defense system to ward off disease and attain true health rather than relying on drugs and vaccines as a sledgehammer to treat symptoms and attempt to destroy germs.

Many disease-causing microbes are normally present in the body and do not cause disease as a matter of course but are kept at bay in people who have healthy immune systems. Other infectious microbes can spread from person to person via water, air, insect bites or exposure to infected body fluids and have the potential to cause serious complications in an immune compromised host.