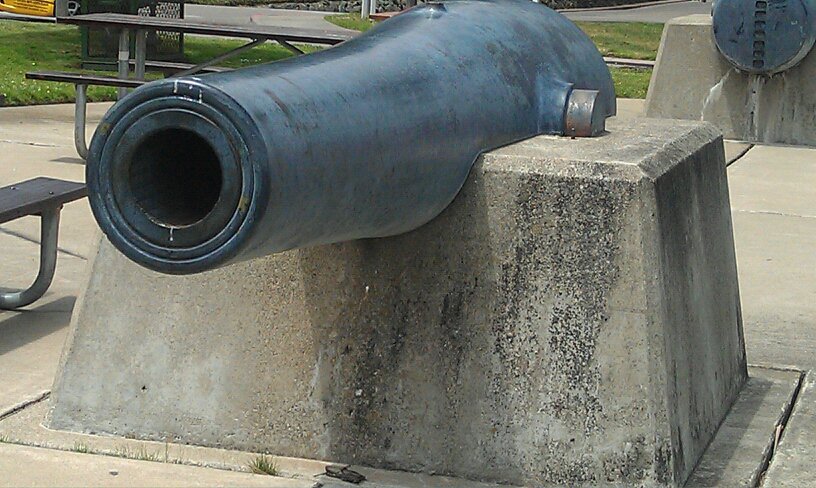 Cannon Points are typically geographic promontories on lakes, rivers, and ocean fronts that were useful for locating cannons that might be a formidable deterrence to any invaders.

Cannons — Not only for Defense

In times of peace and in remote communities, they were more or less critical points from where cannon shots could be heard throughout the area, to alert the community to important events and news.

There are many such cannon points, all over the world. Some still exist as modern bases for the military powers of the world. Of course, the old cannons have been changed to more modern devices but, when fired, they still produce a sound that’s widely audible.

There’s also a “Cannon Point” near our hideout in the boonies up north. The cannon (if there ever was one – which I’m not sure about) is long gone and the former year-round resident community has dwindled to a small fraction, along with the ports for wooden hull ships that were transporting people and goods up and down the shores. Some communities have disappeared entirely.

What has replaced many such cannons and withstood the changing times are the many chapels and churches that call the congregations together to worship. More to the point, it’s their bells that call for assembly and reflection.

From tiny chapels in rural areas to the massive medieval cathedrals in Europe, their bells can be heard for long distances. Small chapels have mostly just one small bell with a high pitch. The big churches may have a dozen or so large bells.

During times of war, such bells were often melted down for their bronze alloy (consisting mostly of copper and tin) and the material used to make warfare items, like cannons and munitions. Others broke or were destroyed when the church towers collapsed in the battles.

It’s no surprise then that, especially in central Europe and following WWII, many new bells were created by specialized bell foundries. It is not only a difficult task to create the forms for such large, often multi-ton weighing bells, but the foundries are also intent on producing specific sound frequencies to fit melodically with others bells at the site of use.

At Christmas and other important times for Christians around the world, the cathedrals are ringing with the full set of bells. Smaller churches with few bells and chapels with one bell only do not have a choice of which bells are ringing.

In recent years, many of the church bell sounds were recorded and their pitch (frequency) identified. If you are interested in hearing the different sounds, you’ll find detailed information at websites like http://glockenklaenge.de and many others.

Listening to their sounds, I find that the number of bells is less important than the overall melodical impression one gets. For example, some of the cathedrals’ sounds are quite discordant to my ear. I prefer the steadier and pitch-balanced sounds of smaller bell assemblies like, for example, that of the St. Michael Church in the village of Grossweingarten (listen here ) in north-central Bavaria that has only four bells, the oldest of which dates from the 16th century.

With that, let me conclude with my wishes for a

Merry Christmas to all readers!