Principia Scientific International (PSI) is legally incorporated in the United Kingdom and serves as a not-for-profit body as per our articles of association. We actively publish science articles, newsletters, compendiums and books for altruistic and charitable purposes. Any profits we make are re-invested so that the financial rewards from sales, member donations, gifts, bequests and grants go towards our mission in helping science education for the broader community.

2. PSI AND POLITICS: THE BASIC PRINCIPLES

PSI serves no political purpose, supports no political party (or parties) and does not engage in political activities. Our advocacy is for the advancement of the traditional scientific method (as per the ideas of Karl Popper) and we are resolute in opposition to political ‘post-normalism‘ in science. 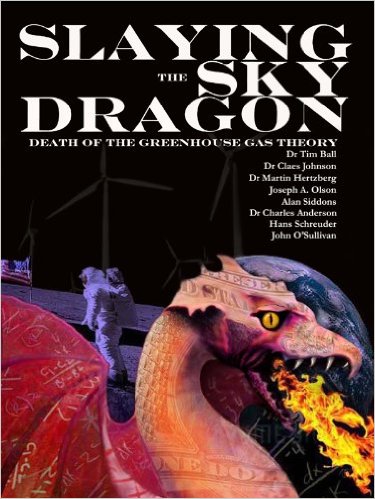 The two-volume publication is the world’s first and only detailed refutation of the greenhouse gas effect. According to prominent climate skeptic, Lord Monckton the book soon became ” the talk of the Cancun Climate Conference.”

We are proud of the science presented in the book and of the fact it has withstood scrutiny from far and wide. Indeed, validation within the wider scientific community became assured since June 2017 when no fewer than 17 peer-reviewed studies in international science journals affirmed our work. Since, many more such supportive studies have been published. Our newest book, Sky Dragon Slayers Victory Lap‘ recounts the journey of our successful ‘slaying’ of junk globalist UN climate science.

Despite our achievements in climate science publishing our prime focus is tackling the root cause of the malaise that befell climatology: the rise of post-normal science.

Climate science was the most conspicuous victim of a hijack attempt of science for global political policy purposes and stands as a stark warning of the insidious power of post-normalism. As President Dwight D. Eisenhower foretold, the monolithic juggernaut that is government science (a key driver of post-normal rationale) is all too easily able to subvert open science debate and deny empirical evidence when it suits.

All around the world supporters of the traditional scientific method are expressing fears that unless principled people unite to stem its ascendancy; ‘post-normal’ science will rise again and again in various guises. We proudly recruit our members from all walks of life, including the science blogging community that is increasingly seen as a much-needed watchdogs of science ethics in our governments and multi-national corporations.

Thanks to the Internet a grassroots movement has grown and succeeded in exposing  the myth of so-called runaway ‘greenhouse gas’ warming. Further landmark achievements are sure to follow as long as openness and transparency reigns.

Team leader and co-founder, John O’Sullivan, pursued a vision to form a large body of experts united in opposing the worst excesses of government-funded science. By working as a team PSI is succeeding where lone voices had failed. From the outset PSI was driven by retired Dutch Analytical Chemist, Hans Schreuder, Texan engineer and science writer, Joseph A. Olson and Canada’s most popular climatologist, Dr. Tim Ball. Dr. Ball was our first appointed Chair of PSI and his reputation endures as a popular figure in the campaign against junk science. In 2013 John Sanderson, Past President of the Royal College of Science Association,  took over as Chairman.

In July 2011 PSI published the first of a series of science papers under the optimistic banner of Principia Scientific International. All PSI’s published papers are thoroughly peer-reviewed among a team of highly qualified experts. PSI is particularly proud of all it’s papers not least our first by Biologist, Professor Nasif Nahle and Astrophysicist, Joseph E Postma. These and all our subsequent free-to-view papers are located in the ‘Publications’ section of this website.

An incontrovertible benchmark of our growing success over post normal junk science came in August 2019 when Dr Ball successfully defeated the ‘world’s leading climate scientist‘ Dr Michael Mann in the epic multi-million-dollar ‘science trial of the century’ in the Supreme Court of British Columbia.

6. POLITICIZATION OF THE SCIENCE ESTABLISHMENT

PSI disavows itself of party political views and never has and never will seek funding from any political party or corporate or educational institutions tainted by party politics or ‘post normal’ ideology.  We aim to sustain an open and objective position in showcasing work by authors/scientists/researchers often shunned  by unsympathetic mainstream journals and publishers appearing to act as politicized ‘gatekeeper’ functionaries.

Our readers and members understand that science, like any profession, is just as likely to be prone to human failings leading to bias and possible corruption, misconduct and criminality. In recent years there has grown a wide perception of deep divisions in the scientific community; fears abound that ‘good’ government science is too often tainted by zealous political advocacy and thus subjectivism is perceived to have unduly swayed the upper echelons of certain national science associations.

If you are a scientist or science-related professional concerned about such a gatekeeping mentality then rest assured that you are not alone and are welcome among us. Please contact us for advice and support. You will find PSI is replete with like-minded men and women now prepared to speak out against those leading science journals and national science academies that appear to have sold out to a hidden political agenda.

Scientists and the wider general public are now more wary of what is reported about science. Rightly or wrongly the traditional peer review process has fallen into some disrepute. The world has learned how a fledgling branch of science, Climatology, has become tarnished by a series of well-documented scandals.

An international ‘grading system’ among science journals that ranks publications for their adherence to an arbitrary code that is sinister and corrosive of an objective peer review process has been exposed. Grassroots scientists, especially those active in the blogosphere, are welcoming a new approach: open peer review.

We call our own non-elitist version Peer Review in Open Media (‘PROM’) and it is done in an inclusive and non partisan, user-friendly spirit as increasingly evidenced on the better contemporary science blogs.

As per our policy statement commitment, PSI is a champion of the new medium of mass peer-to-peer open scientific review. We will ensure that a team of fully qualified reviewers openly and objectively reviews all scientific papers that bear the PSI seal.

As such, we are always looking for highly qualified and experienced new members to join our reviewing team so they may act as citizen science reviewers. So whether you are interested in becoming a PSI Expert Reviewer, or simply want to be part of an exciting new movement in international science, please join us today.

8. OUR BROAD STRATEGY FOR CHANGE

PSI welcomes scientists and all concerned citizens who support the Scientific Method and wish to see corruption in science exposed and remedied. PSI commits itself to advancing the formal creation of a new concept: open online peer-to-peer review. We believe such real time transparent assessment of the latest scientific findings will become the new ‘gold standard’ of peer review to replace the secretive and readily corruptible ‘pal review’ system at the root of the malaise within modern science.

Transparency is as important to PSI as it was to Karl Popper. Each new stakeholder gets a clear idea of how PSI has performed. We will make an annual report detailing what PSI has done and how this has benefited the community.

PSI aims to affiliate with other organizations that share our values and support our ethos to conduct our business with a social purpose. As the association grows we will consult with our stakeholders and possibly amend our legal and financial format of association e.g. either as a limited company (limited by guarantee, public or private companies limited by shares), CIC (as per UK law) or charity. This will be accordance with our stated policies.

PSI began in 2010 first and foremost as a private association carrying on a social activity and must be viable as such. As a business with social goals we aim to generate surpluses to support all our activities, maintain our vital assets, deliver our promised contribution to the community.

Thus far we have kept overheads low by working as committed volunteers. In future, on a case by case basis, we may agree with users beforehand to make a nominal financial charge to help meet our overheads and cover any token recompense we make to our most dedicated and hard-working contributors.

Join us today – membership of PSI is free! Simply sign up to our regular newsletter (link below) to confirm – membership is entirely free to all subscribers. This ensures PSI acts with a community interest, not-for-profit element. All we ask, if you can afford it, is a nominal voluntary donation. We suggest £25 ($30 US; 30 Euros). PSI chooses to operate as non-political science body ostensibly funded by donations from members. If you wish to be part of our fund raising effort please don’t hesitate to contact us here.

As of June 19, 2017, PSI has been legally incorporated under UK law so it meets our express wider charitable purpose of advancing science education and advancing the traditional scientific method. In that regard, we advocate the philosophy of Karl Popper, which stand at odds with ‘post-normal’ science, a less methodologically-robust and seemingly politicized vehicle for much government policy.

Chief Director (and Trustee) of the newly-incorporated Principia Scientific International Limited is John O’Sullivan who continues in the role he has held since PSI formed in 2010. Trustees are required to be ‘fit and proper’ persons and have no criminal convictions, insolvency issues, etc. and be of good moral character. In that regard, John is certified under the UK’s Disclosure and Barring Service (DBS) and has served in public education as a teacher and lecturer over a 30-year period.

PSI dedicated as a ‘not-for-profit’ body

To this end, PSI is now a company limited by guarantee set up with special charitable articles, and is registered in the United Kingdom at both at Companies House (as a company). Unlike an unincorporated association or trust, PSI as an incorporated body, can own property, be liable for its own debts, and can transact business with third parties (i.e. without the need for the trustees to do so on its behalf).

One of the most important parts of the constitution of PSI, as any type of charitable body, is its objects. As the name suggests, this is a list of aims and objectives, and includes (among other things) what we set out to do, who or what will be the beneficiaries of our work, and how we go about achieving what our supporters want.

Principia Scientific’s Articles of Association, Policy and Mission Statement are freely accessible to the public. If you have further questions please contact us at info@principia-scientific.org